The Jewel is the first young-adult, dystopian, romance novel of The Lone City series followed by The White Rose, then The Black Key. It was written by author Amy Ewing and was originally published on September 2nd, 2014 by HarperTeen.

Violet must try to stay alive and when an unlikely friendship offers her an opportunity, she sings to the hope of a better life-until a forbidden romance changes everything. Suddenly Violet finds herself in a different kind of danger, one that may cost her more than she bargained for.

The tale takes place in a dystopian kingdom named the Lone City where individuals from a particular division of the society posses peculiar powers specified as Augries. The society is divided into five divisions and each region is entitled to people who can afford to reside there. The Jewel is the wealthiest of all regions and is entitled to royal individuals while Marsh resides the poorest of people.

The Jewel follows the story of surrogate Violet Lasting (otherwise known as Lot 197). The story begins with Reckoning Day where she is supposed to visit her immediate family prior to attending the auction for the last time. Throughout the day, Violet visits her mother, her younger brother (Ochre), and her younger sister (Hazel) whom she spends dinner with.

The day of the Auction, she, her best friend, Raven, and 198 other surrogates are groomed, primped, and prepared to start their new lives as the carriers of royal children. This is where Violet meets Dahlia who is Lot 200 in the Auction and therefore the most valuable surrogate. She also meets Lucien, a male lady-in-waiting, whose job was to get her ready for the event. She ends up being bought by the Duchess of the Lake.

At the Duchess' palace, Violet is cleaned and changed once more so she can formerly meet her mistress. Her lady-in-waiting, a young mute by the name of Annabelle, is the one who helps her. The Duchess walks in once Annabelle is done and looks Violet over. At first, she seems to be kind, but then she slaps Violet as a violent reminder to behave, and leaves, allowing her to be fixed up so she can come to dinner.

Violet was already hating the Duchess and the palace, but on top of that, she was worried about Raven. She joins the others at dinner, though, and is happy to see that both Raven and Dahlia were there as well. The ladies are enjoying their meals when Garnet, the Duchess’ scandalous son, saunters in drunk. The Duchess, embarrassed by her child’s behavior, removes him. While the Duchess is away, though, the conversation turns towards the surrogates, and Dahlia, along with the Electress (her mistress, the ”Queen” of the Jewel), end up leaving. After the disastrous supper, the others are excuses and all go their separate ways.

The next several days, Violet takes walks with Annabelle, has her first appointment with her doctor, and meets the Duchess’ niece Carnelian. While exploring the castle, she stumbles upon a room. Going inside, she meets Ash. Immediately, they connect, but when Ash starts asking her questions about what it was like to live in the Bank, the two realize that they made a mistake in speaking to one another. Violet leaves, but she can’t get Ash out of her head. 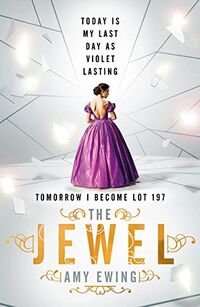 Retrieved from "https://thelonecity.fandom.com/wiki/The_Jewel?oldid=4706"
Community content is available under CC-BY-SA unless otherwise noted.